Zero Hero, the Bonebreaker, is a male character introduced in a trailer released along with the console release of the game.

He has a plaster cast on his left hand. The exact cause of his fracture is unknown, but it's very likely it's due to falling off a vehicle, since he mostly drives open-top vehicles. The flashback scene suggests it was caused by falling off a Lawn Mower, but in the scene he can be seen with a plaster cast already, so it might not be connected.

Zero Hero as he fell off a Lawn Mower

Zero Hero as he fell off a Lawn Mower

This character is also seen driving:

No rivals of this character are mentioned. 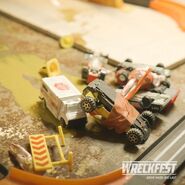 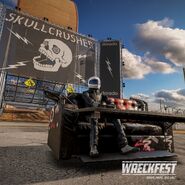